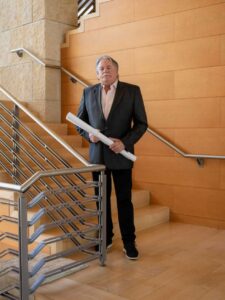 In 1980, Darren Casey was president of his fraternity at Texas State University when the frat house burned down.
Flush with insurance money, Casey discovered the art of property flipping and the plump returns on investment that a roaring real estate market can deliver.
His fraternity got a new house, and the West Texas native — who as a teenager spent summers at what he called “Camp Oil Field,” working on drilling rigs — got his first intoxicating taste of dealmaking.

Casey, 59, settled in San Antonio soon after graduating, hustling commercial leases downtown. “I knocked on a lot of doors and became a pretty successful leasing agent,” he said. He saved his commissions and started his own company, Casey Development Ltd., in 1989.

His company has developed more than 4 million square feet of multifamily projects and commercial, industrial and office space, most of it in San Antonio, though he has projects up and down the Interstate 35 corridor between here and Austin.
In 2007, Casey completed one of the biggest commercial real estate deals in local history, selling a portfolio of 900,000 square feet of office and industry space valued at $114 million. And though his passion for real estate deals started on the streets of San Marcos, not in the classrooms of Texas State’s business school, Casey is a staunch supporter of the university. He talks it up whenever he has the chance, and he donated $1.3 million to Texas State in 2008. The university’s athletic administration complex is named for him.

Casey talked with the San Antonio Express-News at his company’s headquarters at 200 E. Basse Road, the former home of troubled radio giant iHeartMedia. How much did he pay for the property? “Not enough,” he said.

The following transcript was edited for length and clarity.

Q: What was it like growing up in Andrews, Texas?

A: Oh, it was heaven. Greatest high school in Texas, greatest town, greatest community. I remember one time my dad said he got a big promotion. And I said, “Dad, we can’t leave this — this is the greatest life ever.” I played several sports — we had a great golf team. We went to the state championships several years.

My father was my foundation of discipline and integrity, and he had the West Texas handshake. My mother was entrepreneurial and a salesman — she started a business. We always could be better, and Mom, to this day — both of my parents are in their 80s, and my mom’s still out there working.

Q: Does she still own a dress shop?

A: Well, she owned three — in Andrews, Odessa and Midland. I forgot which one they closed. She followed me and opened up one here. She’s where I got my entrepreneurial sales stuff.

My dad set a very moral foundation. If you say you’re gonna do something, you’re gonna do it. If the neighbor’s yard wasn’t mowed, you went and mowed it. You know? We didn’t go to camp. In high school, I stocked groceries at three in the morning, and on the weekends, I’d work on drilling rigs.

Q: Was that your dad’s doing?

A: No, it was just the way of life out there. Everybody in West Texas has a very strong work ethic and, you know, it’s small town. So when I went off to Texas State, it changed. I was like, “Oh, my gosh — there’s a world outside of going around the Dairy Queen every Friday night.”

Q: Your time at Texas State must have made a big impression on you. You’ve given a lot of money to the university.

A: Texas State truly changed my life — that and a couple of friends in my fraternity. That’s really where I got into the real estate business. Our fraternity house burned down, and I was the president. We took the insurance money and went out on I-35 — this was 1980 when the land flipping on 35 was going around. We took the insurance money, flipped it for a bunch of money, and I said, “Wow, this is kind of cool.”

Q: Did you wind up with a new fraternity house at some point?

A: Yeah. But, you know, that piqued my interest. I was getting a business degree, and that summer I was working offshore drilling rigs. But that’s when I decided I wanted to be in the real estate business and got my real estate broker’s license.

Q: Why offshore drilling rigs? Was it the money or the adventure?

A: It wasn’t the adventure. But it was an adventure, especially in Hurricane Allen. No, it was the money. My dad gave me an allowance and helped me pay for school, but between student loans and that, I wanted — there were things that I wanted, and the only way I could get them was work. … It was a hell of a lot of money working on offshore rigs, but it was —

Q: What was working on an offshore rigs like?

A: It’s like you’re a worm and everybody there are lifers … from Louisiana to Canada. They don’t like college boys, so there was a lot of hazing. They’re like, “I bet you can’t hold that hundred-pound sack right over your head.” It was real fun — it was cement and I was sweaty. I’m like, “Yeah, I can” and I hold it over my head, just standing there. And then the guy behind me takes a razor blade and cuts the sack. A lot of fun.

And then, on the weekend, all these boats would go around those rigs with girls, fishing. You’re sitting up there in your coveralls and hard hat, and you’re like, “One day I’m gonna have one of those.”

Q: What did you do after graduating from Texas State?

A: I tried to move back to West Texas for a year. But my dad encouraged me to go to (Central Texas), said, “Get the hell out of here.”

Well, I was interviewing in Austin and in San Antonio. That was really back in the mustache days. Everybody smoked in the office. I went over and applied at an office over there in Energy Plaza. They said they’d get back with me. But I was like — I gotta have a job. I mean, I didn’t have any brakes on my car, I didn’t have a back seat. I gotta have a job. They never got back to me, so I started calling and calling. So I went and sat in the lobby every day, 8 in the morning waiting for him to come to his office. That’s when I learned a trick — every executive always has a back way to get out where you don’t have to walk through the reception area because there might be somebody sitting there waiting for you. I already had some sales skills, and I sat in his office every day until he said, “Anybody that would do that — sit there — I’m gonna give you a chance.” And he said, “Here’s the deal: You’re gonna work in downtown.” But he saw my car and said, “You can’t drive clients around in that.” So he said, “Here’s the deal: I’m going to take you down here to Alamo National Bank and I’m gonna co-sign a (loan) for $3,000, and you better produce.”

Q: What was downtown like in the early- to mid-1980s? Was this before the real estate crash?

A: There were incentives to revitalize downtown. There was a lot of rehab developments. My first two assignments were 110 Broadway and the South Texas Building, but they didn’t have any parking. so they were unleasable. Back then, we didn’t have computers, cellphones, this and that. You had your Day-Timer Planner and your notepad, and you had your shoes, and you dressed nice, and you knocked on doors, and you tried to get information. “When does your lease expire? How many square feet do you have?”

I had a building called Heritage Plaza, and I did 19 deals one year, when Albert Bustamante was our county judge. It gave me an opportunity to meet people, and it evolved into me buying Travis Park Plaza.
But all the money and all the tax incentives and all the things that (city and county officials) had given, it didn’t work. Nobody wanted to live down there. There were no grocery stores, no young people. I think it’s really come back now, between the River North and the Museum Reach. My good friend Kit Goldsbury (the billionaire behind Silver Ventures, the Pearl’s developer) — the Pearl has had a lot to do with why downtown is happening now.
I’m excited about downtown right now. We didn’t have the population before, but that was 1987.

Q: You started Casey Development in 1989, and you pretty quickly turned your attention away from downtown. Why?

A: I was following opportunity. I studied major thoroughfares, and I was able to buy major intersections at Wurzbach Parkway and I-35 and U.S. 281, and 20 years later we have Wurzbach Parkway finally completed. I’ve bought some of these large pieces of land, which I’m proud that we’ve been able to hang in there during three corrections. A mentor of mine taught me to not buy land without a use, and that’s kind of been my theme ever since.

Q: But you would have bought land at Wurzbach Parkway and the highways if you’d known it would take so long to complete the parkway’s construction?

A: Oh, yeah, because I had a use. That’s where we did the Kmart deal and Northside Ford. So I had all that, and I had all the other surrounding it. … We developed almost immediately a feed of office out there, and I still own a nice piece out there. That was a sweetheart deal — that was the basis of Casey Development and getting started with it.
But San Antonio has always been a second tier market on a national level. You know, we’re not Austin.
But we like Austin, and San Marcos has really been a cherry for us. San Marcos has been great. We’ve done a lot of deals there. There was a lot of political controversy, but we’ve got a 13-story project going on there right now — literally on (the Texas State) campus. It took 10 years to get approved.
And we really love New Braunfels. We’re doing some pretty good work there — two projects.

Q: What kind of projects are you focusing on now?

A: I’m not focusing on doing big shopping centers. I’m focused on (smaller) commercial buildings because Amazon isn’t gonna bring you your coffee or do your nails or give you your ice cream or whatever, right? So we’re focused on small stuff because with the big-box stuff, who knows what’s gonna happen. Amazon and online shopping has really killed the bricks-and-mortar piece of the big shopping centers. So we’re focusing on the smaller, day-to-day-type of things. And multifamily remains our primary platform.

We’ve got a project that’s going up called Sunset at Treeline. This is my contribution back to San Antonio for doing such an ugly development at (the intersection of) 281 and 410. This my “I’m sorry” building. The architecture in this thing and the amount of money we’re spending on this is, it’s to make up for the disaster that I did at 281 and 410, which was my first development.